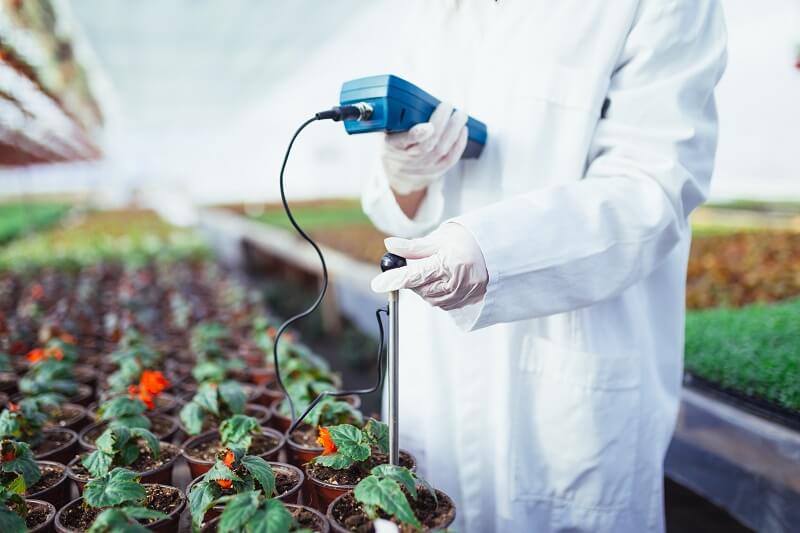 The basis of achieving good agricultural practices is unquestionably the quality of the soils.

The degree of alkalinity or acidity, that is, the pH of the soil, is a factor that must be properly controlled in order to attain a high quality product. If the soil is too alkaline or too acidic, certain methods need to be applied in order to bring the soil to the level that the crop requires. Proper management of acidic soils is of the essence, since it has been demonstrated that acidic soils are less fertile than soils with better alkalinity. Time and again, scientific studies and laboratory tests have demonstrated that the condition of the soil and its pH level directly affect the availability and absorption of nutrients, thereby exerting a determinant influence on the soil itself. Levels of acidity or alkalinity have a direct bearing on the creation of the soil’s microorganisms, which in turn facilitate the availability of nutrients for the plants.

The influence of climate on soil conditions is indisputable. This is true to such an extent that there is a World Soil Classification, based on geographic regions, where the characteristics of each region have been studied. Atmospheric and environmental factors such as rainfall, temperature levels, humidity, and wind, control the levels of leaching and of erosion of minerals in the soil. These factors have a great influence on the soil’s chemical characteristics and properties, in particular on levels of acidity, alkalinity, and salinity. Generally, acidic soils are associated with leached terrains, with a high presence of precipitation, while alkaline soils are characterized as being drier.

Based on scientific studies and fieldwork conducted over the years regarding terrain types, we can state that the principal causes of soil acidification are:

– Soil washing, given that it uses disinfectant chemicals, which leads to erosion and the loss of many macronutrients and micronutrients in the soil and greatly reduces hydrogen levels, thus dramatically intensifying levels of acidity.

– Nitrification processes, which increase nitrogen levels, principally resulting from the use of chemical fertilizers, which are rich in ammonium nitrogen.

– Release of hydrogen from plant roots, a process determined by environmental conditions and levels of nutrients in the soil.

– Decomposition of organic material, which, if uncontrolled, can produce undesirable levels of toxics gases, which are highly noxious for the soil, and thus for crops.

– Acid rains, due to a number of atmospheric and environmental causes, principally pollution, emissions from the burning of fossil fuels, the greenhouse effect, and global warming. These factors produce acid rains rich in ammonia, nitrogen, and sulfur dioxide, which have an acidifying effect on soils.

It is of the utmost importance to consult the table of optimal pH levels for each crop and type of terrain, since that is the way that effective measures can truly be taken in the management of acidic soils.

It is generally accepted that optimal pH levels in soil range between 5.5 and 7 on a scale of 0 to 14. The best soils are neither very acidic nor very alkaline, but are situated at an intermediate point, considered optimal for crops. Yet as mentioned above, each crop has its own ideal conditions when it comes to pH levels, and therefore there is no one formula that can be applied in all cases.

Some of the major effects of soil acidification are:

– An extreme decrease in availability of the most important nutrients, such as phosphorus, magnesium, and calcium, for their optimal utilization by the plants to ensure their satisfactory development.

– A high risk of reaching toxic levels of metals such as aluminum, manganese, and others, which become highly mobile in acidic soils. The harmful effects of aluminum have been scientifically proven, since it diminishes growth and length in plants. This occurs in two ways: by impeding natural rates of cellular growth and by impeding cellular division. For its part, manganese produces visible damage in the aerial and upper parts of plants, which manifests as necrotic spots on the stems and leaves, as well as wrinkling of the leaves.

– When the pH dramatically decreases, the soil loses its capacity to naturally neutralize the effect of acids, becoming sterile and thus unproductive for any type of crop.

– If the reduction in the pH becomes extreme, below 4 on the table, the effect seen in the crops is a decreased growth of the plants, which appear atrophied. Biomass, which favors a proliferation of microbes and bacteria, highly beneficial for the plants, diminishes. It should be borne in mind that these microbes and bacteria recycle organic remains, transforming them into vital nutrients for plant growth. Without them, the soil structure weakens. Moreover, the microbe population favors internal aeration of the soil, as well as water circulation, and their absence results in soil crusting.

– Acidification is considered highly prejudicial for crops. As mentioned above, certain pH levels are considered optimal, depending upon of the type of crop and the soil type.

Liming is the procedure most used, with highly effective results for reducing soil acidity levels. It consists of the application of lime in various forms. Liming significantly contributes to raising levels of hydrogen in the soil, thus favoring the microbial and bacterial growth that is so necessary for generating vital crop nutrients.

The principal goal of applying lime to acidic soils is to raise pH levels to the required values, suitable for growing crops. There are variations in the methodology, however, depending upon the terrain. For example, in moist tropical zones, this effect is accomplished by reducing the saturation of aluminum, for which a prior analysis is made to determine the aluminum tolerance levels of each crop. Since each soil has its own characteristics, optimal pH levels will differ, depending upon geographic location. One might think, and it is widely considered, that the optimal pH for cultivating crops in soils of tropical zones is lower than what is required in temperate zones.

This is a phenomenon that stems from the types of clay present in each type of soil. It is thus of great importance to have a practical awareness of the terrain and of the crops, in order to establish and determine optimal pH levels and the correct lime requirements when it comes time to apply the liming.

There is a great variety of materials that can be used for soil liming. The difference lies is in the capacity each of them has for neutralizing acidity.

– Agricultural lime (aglime): This the most accessible and most commonly used material.

– Calcium oxide: Also known as “quicklime.” Its reaction and effects on the soil are rapid. It is more expensive, however, that carbonates and must be carefully handled to achieve the maximum benefits.

– Calcium hydroxide: Also known as “slaked lime.” This also produces a rapid reaction and can be difficult to handle.

– Dolomitic lime: This is a carbonate of calcium and magnesium. It reacts more slowly than agricultural lime, but contributes magnesium.

The processes through which lime reduces soil acidity are quite complex. For the sake of illustration, however, we can simplify by explaining that this is a chemical process in which the lime increases the pH, reducing acidity by transforming certain hydrogen ions in water. This reaction has a positive effect for increasing the pH of acidic soils and occurs due to a decrease in the concentration of hydrogen ions, which are the cause of the acidity. Liming is proven as the most effective method for managing acidic soils.

Once the liming is applied, it is quite useful to conduct studies on the pace of acidification and alkalinization of the soil through a routine sampling protocol. That way, we can effectively determine the amounts of lime that should be applied, as well as the proper frequency between applications.

Soil Factory Lab is unquestionably the most expeditious and competitive agricultural soil analysis laboratory in the market at an international level. Our turnaround times and top quality results make this laboratory the perfect, most useful tool that agricultural growers throughout the world can apply to any crop.