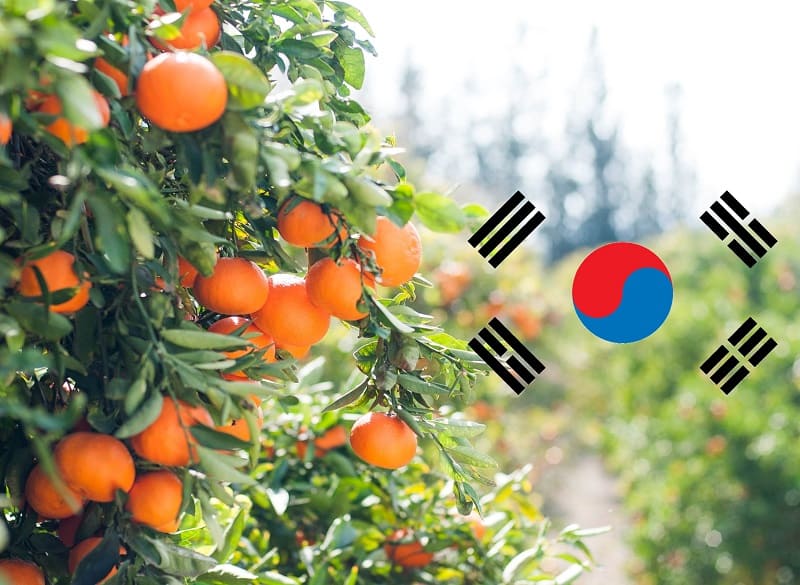 The new Korean MRLs will bring challenges for the citrus industry in that popular pesticides will essentially be phased out. Pesticides are crucial to the agricultural industry because they increase the possibility of a quality yield. However, pesticide use results in pesticide residue. A component that must be regulated by the government so that residues are below non-harmful consumption levels. The level is known as an MRL (maximum residue level) which is the highest level of pesticide residue that is legally tolerated in or on food or feed when pesticides are applied correctly in accordance with Good Agricultural Practice (Codex Alimentarius).

The Codex Alimentarius is a collection of internationally recognized standards made by the Food and Agriculture Organization. Countries can choose to take the recommendations or research, propose, and follow their own. Most of the countries have chosen the latter, and thus MRLs vary widely across the globe.

MRL’s will limit residue levels so that they will not be a concern to human health. However, changes to MRL policy impacts growers and manufacturers who have established application guidelines and practices to keep pesticide residue levels at a minimum. Lowering or not establishing an MRL can negatively impact production and cost.

Korea is one of the leading export markets for US food growers and manufacturers. As the sixth-largest agricultural export destination, it is one of the last export markets to transition to an MRL positive list system. Before moving forward with a positive list, Korea had a complex MRL decision hierarchy that deferred to national MRLs set on other commodities and Codex MRLs. That was until the Korean Ministry of Food and Drug Safety (MFDS) (central MRL agency) started to plan the transition. They have recently been working with CA growers and manufacturers to establish their own permanent and temporary MRLs.

According to the California Citrus Quality Council (CCQC), it has been working with MFDS, USDA’s Foreign Agricultural Service, and various registrants to ensure that MRLs are established for the pesticides used by California citrus growers. Starting Jan. 1, 2022, MFDS will remove many temporary MRLs as it fully enforces its new MRL framework.

A pain point is that pesticides not registered by the end of 2021 will be phased out and automatically receive a 0.01 ppm MRL limit. That raises an issue with minor pesticide manufacturers who don’t have the financial means to test and register a pesticide.

CCQC recommends that the industry reconsider using any pesticide for which there will not be an MRL established by Jan. 1, 2022. PCA’s and growers may want to avoid using these active ingredients.

When we compared our internal data of historical pesticide results that have exceeded MRLs with the CCQC update, we made some interesting findings.

The California citrus category is composed primarily of oranges, mandarins, lemons, and grapefruit.

Reading the table below:

There are four categories: Oranges, Mandarins, Lemons, and Grapefruit with their respective pesticides that either historically showed a tendency to exceed the Korean MRL, exceeded the MRL limit for Korea, or were in our top found pesticides for US-grown citrus. 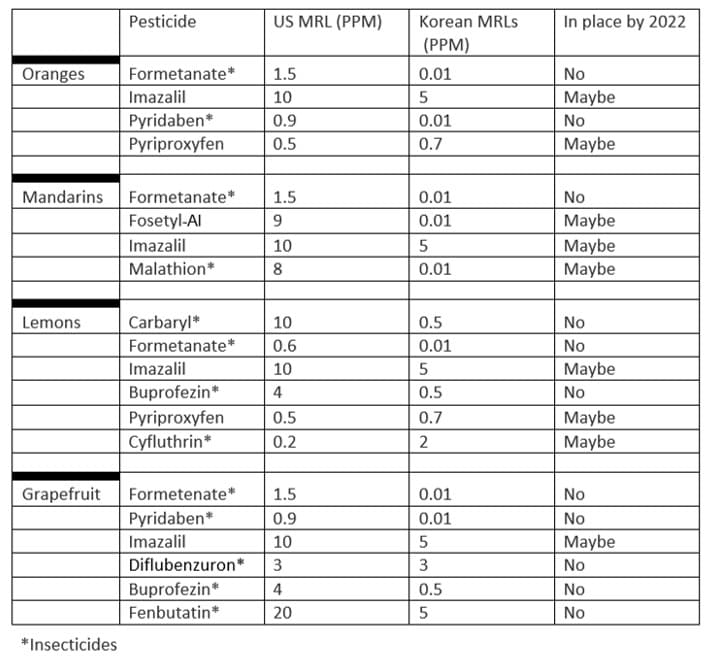 The correlation we found was that pesticides that (in the past) had exceeded MRL limits in US- grown citrus are likely not to be registered by 2022. According to CCQC, PCA’s and growers may want to avoid using these active ingredients in their pesticide plans.

To help producers maintain MRL compliance, we suggest performing degradation studies for some of these critically essential chemicals to citrus production. Degradation studies can help growers develop customized application criteria to improve the likelihood of MRL compliance. This type of data can help growers modify application rates, PHI (pre-harvest interval), and other variables. The residues on the finished product should be below the new 0.010 ppm limits. Let AGQ know if you have any questions about setting up a degradation study and developing customized PHIs to help improve the frequency of MRL compliance on exported products.

The identifiable active ingredients that are not going to be registered by 2022 are insecticides. The new legislation will leave farmers with a reduced quantity of insecticide options. We suggest that farmers currently using these compounds find alternatives as soon as possible for common pests or conduct degradation studies to assess the feasibility of still using these chemicals while maintaining residues less than 0.01 ppm

If you are concerned about how this will impact your business, consider consulting your local PCA. If you are looking to see if your citrus crops are MRL compliant for Korea, don’t hesitate to reach out to our knowledgeable AGQ Labs USA sales team.