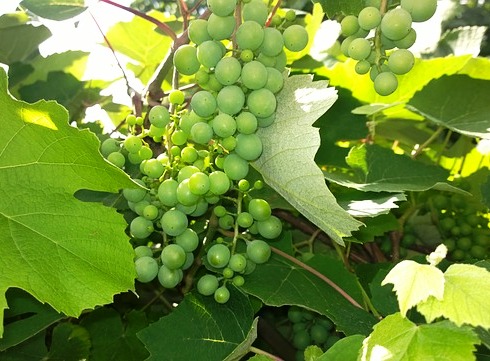 Often, nutritional unbalances are not exclusively due to the deficiency of a single element. In many species it is indeed clear that, under certain soil or growing conditions, the shortage or excess of a single element is easily identifiable, as is the case of iron deficiency in citrus fruit when cultivated in certain pH conditions or with a poor choice of pattern.

In most cases, however, the visual symptomatology of a physiopathy is hard to assign exclusively to a single element. In such circumstances it is preferable to speak in terms of nutritional disorders rather than deficiencies.

Table grapes are one of the cultivated species that display the greatest incidence of these types of problems. Indeed, due to a lack of technical know-how, they may initially be wrongly defined as exclusive deficiencies of Nitrogen, Potassium or some other primary or secondary macronutrient.

Following this line of deduction we can observe various visual symptoms in distinct phenological stages, all originally assigned to a deficit, excess, or mismanagement of nitrogen nutrition. Nonetheless, upon further inquiry, the complexity of each of them is noted. We can more specifically define four distinct types of disorders: Spring Fever, Inflorescence Necrosis, Bunch-Stem Necrosis, and Mushy Berry.

Even though all these physiopathies have a different symptomatologies and appear at different phenological stages, their origin appears to lie in a single nutrient, in this case Nitrogen. It would be best to relate them, however, to disorders in amino acid synthesis metabolism, where in addition to Nitrogen, some other additional nutrient may be involved, almost always some primary or secondary cation. At the same time, one must not lose sight of management issues such as the size of the crown or root volume.

The problem arises when points start to be found of excess concentration of NH4 and nitrogenated compounds belonging to the amino acid formation cycle. These compounds, called polyamides, have been cited in the scientific literature as Carbon-Nitrogen reserves in plant tissue. They are also considered to be good markers for determining stress levels within the plant. The most frequent of these polyamide concentrations is Putrescine.

In order to understand the processes that allow for an accumulation of these compounds in plant organs, it is necessary to recall how Nitrogen is absorbed and metabolized within the plant. All metabolically active Nitrogen is reduced in the plant’s organs, either in the form of amines, amides, or other proteins. However, almost all of the Nitrogen absorbed is in the form of NO3-, which is the most oxidized version of Nitrogen. Once the NO3- is transported to the photosynthetically active organs, the reduction and subsequent conversion to proteins commences.

In the first case, it often occurs that the supply of Magnesium is insufficient and the functionality of the glutamine synthetase enzymeis affected. In the second case, a saturation tends to occur in the root area due to irrigation patterns, either due to soil and climate issues or to poor design of the system. This allows the soil to be saturated more than half of the day, thus quite significantly reducing the activity of certain microbial flora that act as nitrification agents. As a result, the reduced forms of Nitrogen from the fertilizers added to the irrigation are oxidized. The Ammonium cation can thereby accumulate in the active root profile, thus forcing its absorption, while the absorption of other cations that are also needed is limited.The efficiency of our nutrition strategy is thus diminished.

Spring Fever: This physiopathy was first described rather recently, towards the end of the last century by the University of California. Their description depicted a symptomatology similar to a lack of potassium in early spring, but the leaf and petiole values noted did not indicate such an origin as likely. In the leaf there is an unbalance of C-N, which seems to occur due to a deficient synthesis of carbohydrates. Also present are problems in the respiration of available sugars. The physiopathy also surely bears a relationship to alternate cycles of hot and cold in early spring. Basically it starts with a phase of null photosynthesis capacity, which produces a break in the Krebs cycle. At this point the synthesis of amino acids is diminished, which, in the photosynthetically active organs, produces an accumulationof NH4+ and polyamides in their intermediate production phase, fundamentally Putrescine. Visually,this physiopathy initially corresponds to chlorosis along the edges of the leaves, wrinkling, and subsequent necrosis.

Similar effects can be observed in the inflorescences, which can diminish in size, length, and number of flowers. If these types of problems extend over time and are passed along to another phenological stage, they may coexist with another physiopathy named LRN, Late Raquis Necrosis orbunch-stem necrosis, and later problems of mushy fruit, etc.

All these disorders are defined by a poor Nitrogen regime, not only in the current cycle but also in the final phase of the past cycle, the post-harvest, where the levels of reserves are determined with which the plant will wake up at the end of winter. The reserves of a plant can be sized with specific trials that determine the contents of Arginine and Starch in the root. These contents are related to the vigor with which the plant will awaken during the next cycle. And that factor needs to be known in order to correctly size the irrigation and nutrition plan, so as not to provoke situations favoring the appearance of these disorders.

Do not hesitate to contact our Agronomy department for more information here.